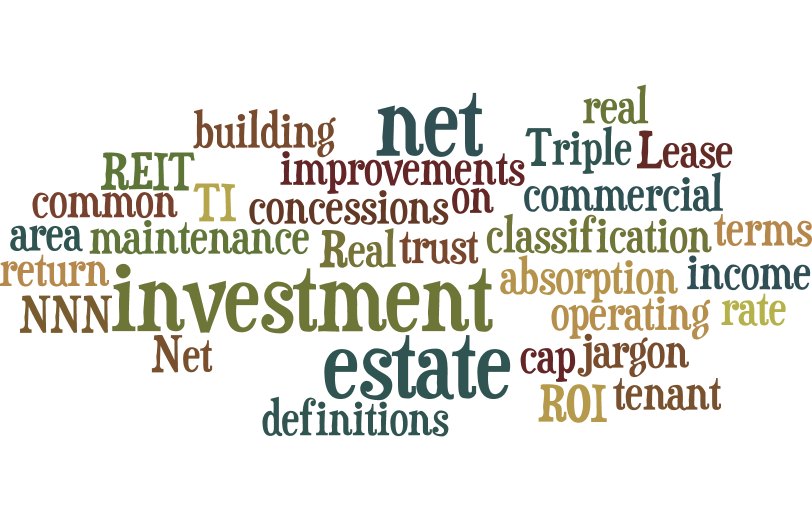 Posted at 10:01h in Uncategorized by Applied Capital 0 Comments
0 Likes

*All terms and definitions have been provided by CoStar*

Build-to-Suit: A term describing a particular property, developed specifically for a certain tenant to occupy, with structural features, systems, or improvement work designed specifically for the needs of that tenant. A build-to-suit can be leased or owned by the tenant. In a leased build-to-suit, a tenant will usually have a long-term lease on the space.

Buyer: The individual, group, company, or entity that has purchased a commercial real estate asset.

Central Business District: The designations of Central Business District (CBD) and Suburban refer to a particular geographic area within a metropolitan statistical area (MSA) describing the level of real estate development found there. The CBD is characterized by a high density, well organized core within the largest city of a given MSA.

Class A: A classification used to describe buildings that generally qualify as extremely desirable investment-grade properties and command the highest rents or sale prices compared to other buildings in the same market. Such buildings are well located and provide efficient tenant layouts as well as high quality, and in some buildings, one-of-a-kind floor plans. They can be an architectural or historical landmark designed by prominent architects. These buildings contain a modern mechanical system, and have above-average maintenance and management as well as the best quality materials and workmanship in their trim and interior fittings. They are generally the most attractive and eagerly sought by investors willing to pay a premium for quality.

Class B: A classification used to describe buildings that generally qualify as a more speculative investment, and as such, command lower rents or sale prices compared to Class A properties. Such buildings offer utilitarian space without special attractions, and have ordinary design, if new or fairly new; good to excellent design if an older non-landmark building. These buildings typically have average to good maintenance, management and tenants. They are less appealing to tenants than Class A properties, and may be deficient in a number of respects including floor plans, condition and facilities. They lack prestige and must depend chiefly on a lower price to attract tenants and investors.

Class C: A classification used to describe buildings that generally qualify as no-frills, older buildings that offer basic space and command lower rents or sale prices compared to other buildings in the same market. Such buildings typically have below-average maintenance and management, and could have mixed or low tenant prestige, inferior elevators, and/or mechanical/electrical systems. These buildings lack prestige and must depend chiefly on a lower price to attract tenants and investors.

Contiguous Blocks of Space: Space within a building that is or is able to be joined together into a single contiguous space.

Deliveries: Buildings that complete construction during a specified period of time. In order for space to be considered delivered, a certificate of occupancy must have been issued for the property.

Delivery Date: The date a building completes construction and receives a certificate of occupancy.

Developer: The company, entity or individual that transforms raw land to improved property by use of labor, capital and entrepreneurial efforts.

Direct Space: Space that is being offered for lease directly from the landlord or owner of a building, as opposed to space being offered in a building by another tenant (or broker of a tenant) trying to sublet a space that has already been leased.

Existing Inventory: The square footage of buildings that have received a certificate of occupancy and are able to be occupied by tenants. It does not include space in buildings that are either planned, under construction or under renovation.

Flex Building: A type of building designed to be versatile, which may be used in combination with office (corporate headquarters), research and development, quasi-retail sales, and including but not limited to industrial, warehouse, and distribution uses. A typical flex building will be one or two stories with at least half of the rentable area being used as office space, have ceiling heights of 16 feet or less, and have some type of drive-in door, even though the door may be glassed in or sealed off.

Full Service Rental Rate: Rental rates that include all operating expenses such as utilities, electricity, janitorial services, taxes and insurance.

Growth in Inventory: The change in size of the existing square footage in a given area over a given period of time, generally due to the construction of new buildings.

Industrial Building: A type of building adapted for such uses as the assemblage, processing, and/or manufacturing of products from raw materials or fabricated parts. Additional uses include warehousing, distribution, and maintenance facilities. The primary purpose of the space is for storing, producing, assembling, or distributing product.

Leased Space: All the space that has a financial lease obligation. It includes all leased space, regardless of whether the space is currently occupied by a tenant. Leased space also includes space being offered for sublease.

Leasing Activity: The volume of square footage that is committed to and signed under a lease obligation for a specific building or market in a given period of time. It includes direct leases, subleases and renewals of existing leases. It also includes any pre-leasing activity in planned, under construction, or under renovation buildings.

Market: Geographic boundaries that serve to delineate core areas that are competitive with each other and constitute a generally accepted primary competitive set of areas. Markets are building-type specific, and are non-overlapping contiguous geographic designations having a cumulative sum that matches the boundaries of the entire Region (See also: Region). Markets can be further subdivided into Submarkets. (See also: Submarkets)

Multi-Tenant: Buildings that house more than one tenant at a given time. Usually, multi-tenant buildings were designed and built to accommodate many different floor plans and designs for different tenant needs. (See also: Tenancy).

Net Absorption: The net change in occupied space over a given period of time. Unless otherwise noted. Net Absorption includes direct and sublease space.

Net Rental Rate: A rental rate that excludes certain expenses that a tenant could incur in occupying office space. Such expenses are expected to be paid directly by the tenant and may include janitorial costs, electricity, utilities, taxes, insurance and other related costs.

New Space: Sometimes called first generation space, refers to space that has never been occupied and/or leased by a tenant.

Office Building: A type of commercial building used exclusively or primarily for office use (business), as opposed to manufacturing, warehousing, or other uses. Office buildings may sometimes have other associated uses within part of the building, i.e., retail sales, financial, or restaurant, usually on the ground floor.

Owner: The company, entity, or individual that holds title on a given building or property.

Planned/Proposed: The status of a building that has been announced for future development but not yet started construction.

Preleased Space: The amount of space in a building that has been leased prior to its construction completion date, or certificate of occupancy date.

Price/SF: Calculated by dividing the price of a building (either sales price or asking sales price) by the Rentable Building Area (RBA).

Property Manager: The company and/or person responsible for the day-to-day operations of a building, such as cleaning, trash removal, etc. The property manager also makes sure that the various systems within the building, such as the elevators, HVAC, and electrical systems, are functioning properly.

Quoted Rental Rate: The asking rate per square foot for a particular building or unit of space by a broker or property owner. Quoted rental rates may differ from the actual rates paid by tenants following the negotiation of all terms and conditions in a specific lease.

Relet Space: Sometimes called second generation or direct space, refers to existing space that has previously been occupied by another tenant.

Rentable Building Area: (RBA) The total square footage of a building that can be occupied by, or assigned to a tenant for the purpose of determining a tenant’s rental obligation. Generally RBA includes a percentage of common areas including all hallways, main lobbies, bathrooms, and telephone closets.

Rental Rates: The annual costs of occupancy for a particular space quoted on a per square foot basis.

Sales Volume: The sum of sales prices for a given group of buildings in a given time period.

SF: Abbreviation for Square Feet.
Single-Tenant: Buildings that are occupied, or intended to be

occupied by a single tenant. (See also: Build-to-suit and Tenancy)

Sublease Space: Space that has been leased by a tenant and is being offered for lease back to the market by the tenant with the lease obligation. Sublease space is sometimes referred to as sublet space.

Submarkets: Specific geographic boundaries that serve to delineate a core group of buildings that are competitive with each other and constitute a generally accepted primary competitive set, or peer group. Submarkets are building type specific (office, industrial, retail, etc.), with distinct boundaries dependent on different factors relevant to each building type. Submarkets are non-overlapping, contiguous geographic designations having a cumulative sum that matches the boundaries of the Market they are located within (See also: Market).

Suburban: The Suburban and Central Business District (CBD) designations refer to a particular geographic area within a metropolitan statistical area (MSA). Suburban is defined as including all office inventory not located in the CBD. (See also: CBD)

Tenancy: A term used to indicate whether or not a building is occupied by multiple tenants (See also: Multi-tenant) or a single tenant. (See also: Single-tenant)

Tenant Rep: Tenant Rep stands for Tenant Representative. In a typical lease transaction between an owner/landlord and tenant, the broker that represents the interests of the tenant is referred to as a Tenant Rep.

Time On Market: A measure of how long a currently available space has been marketed for lease, regardless of whether it is vacant or occupied.

Under Construction: Buildings in a state of construction, up until they receive their certificate of occupancy. In order for CoStar to consider a building under construction, the site must have a concrete foundation in place. Abbreviated UC.

Year Built: The year in which a building completed construction and was issued a certificate of occupancy.

YTD: Abbreviation for Year-to-Date. Describes statistics that are cumulative from the beginning of a calendar year through whatever time period is being studied.